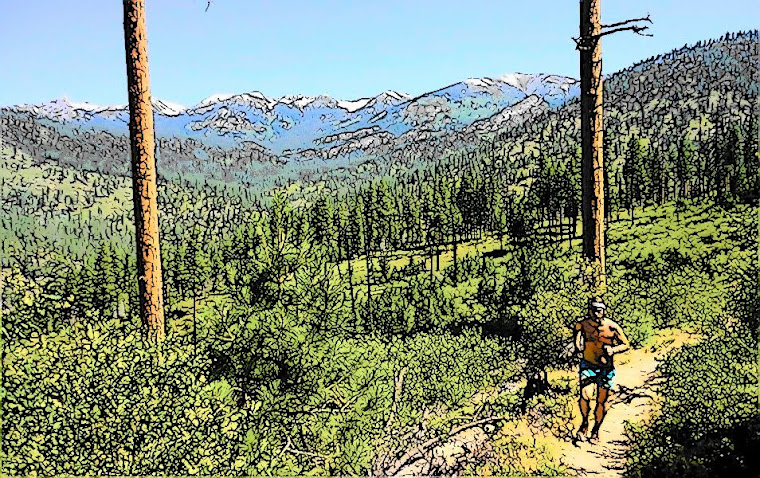 Last year I had ran the inaugural running of the Quest for the Crest 10k outside of Burnsville, NC in the Black Mountains, the highest ridgeline east of the Mississippi River.  My fellow race director buddy Sean ‘Run Bum’ Blanton had created a 10k race that ran from the bottom of the mountain, over the top and then back down again, a climb of 3,100 ft, followed by an equal descent, and billed it as the “Hardest 10k in the World.”  Of course I had to participate in something this awesome, especially considering the majestic beauty that encompases the Black Mountains.  I had a solid race, finishing in 5th place overall, but I longed for more miles after finishing, which can only be attributed to the fact that I’m a crazy ultra runner.

Well, Sean thought the same thing apparently, and a few weeks after the race he contacted me in helping him create a 50k route though the Blacks that would be just ridiculously hard, but not full of multiple loops and bunch of out and backs.  After many drafts, we settled on the the current point-to-point course, which was a natural line throughout the range and included over 11,500 ft of climbing in 32 miles.  We had essentially just created the hardest 50k in the United States based solely off of the numbers.  That didn’t include the fact that almost all of the route was on some ungodly technical trail.  The route would include three 3,000 ft+ climbs and descents from the S Toe River valley, to the crest of the Black Mountains, as well as including a 3 mile section on the ever undulating 6,000 ft+ ridgeline itself.

I couldn’t wait to run it, so I signed up fully knowing what I was getting myself into, but that didn’t deter me at all!  Having run all of the course in sections multiple times before, I knew that a finish time in the 8-9 hour range was possible for me, with my main goal of finishing just sub 8 hours if I had the legs that day and competing for a potential top 10 finish.  I began the race and was on pace for the first 14 miles to complete the course in the low 8 hour time.  I ran conservatively on the first climb and descent as well as the next climb up to the ridge.  The only problem I was having though was stomaching my food.  An issue that on a run like this is eventually going to catch up to you.

After a short pit stop on the second 3,000 ft+ climb, I began to feel a bit better, but I still really couldn’t stand the taste of the food I had brought along for fuel, which was odd considering I had been using the same source for almost a year with no ill effects.  I ended up hitting my high point in the race along the 6,000 ft crest of the Black Mountains.  I believe that I was actually more fueled from the amazing views along the ridge, that everything else just became secondary.  I began to pass people who were having a difficult time managing the technical footing of the trail and put a solid gap on some of my competitors.  However, I soon realized that I was running low on water and would not be hitting another sure source for 5 miles.  I tried to fill up at a small spring, but the flow was such a trickle that I could barely get anything in my bottle.  I decided to just cruise the descent and hope for the best.

Now, I was in double trouble.  I was having trouble consuming fuel and now I was quickly becoming dehydrated in the humid air.  At the bottom of the descent at Colbert Ridge aid station, I shortly contemplated throwing in the towel.  I was still on 8 hour pace, but I knew then that it was a pipe dream and now it was all about survival and finishing.  I tried to get as much water in me as I could and had my buddy Jody, my crew for the day, load me up with a bag full of potatoes, which was the only thing I could stomach at that point.  Shortly, I began to walk down the road to the next trail and the last climb of the day, a climb that would be the longest and highest yet along the Buncombe Horse Trail.

The wheels really started to come off on the last climb.  Along the climb I would be past by about six people, even though they were all hiking.  My legs began to feel extremely heavy and I couldn’t control my heart rate from busting through my chest without moving at a slow hike.  Once I hit the last half mile of the climb, a rocky scramble up what seemed a dry creekbed to the high point of the race at Big Tom Gap, I began to feel dizzy, nauseous, and my quads wanted to cramp with each big step up from boulder to boulder.  I sat down on the rocks twice during this half mile to just try and organize myself.  All the while being past by more and more folks.  By the time I reached the aid station at the bottom of the half mile final push for the second time, I promptly laid down in the grass and proceeded to give in and just pass out and take a nap.  Of course the medics at the aid station wouldn’t let me just give in and told me I needed to get myself more salt and fluids.  You should have seen the sight, as many runners that passed by did, as I laid in the grass, chomping on potato chips, and sipping water out my bottle.  I had completely fell apart.

Eventually, after frolicking in the alpine grasses of the Black Mountains, I picked myself up and started walking the final six miles down to the finish.  Feeling slightly rejuvenated from the coconut water kindly given to me from one of aid volunteers own stash, I hiked and chatted with another fellow western NC runner along the only flat part of the race for the next two miles until we hit the MST (Mountains-to-Sea Trail).  Since the last 4 miles would be downhill, I tried to run again, just so I could get done with this crazy stupid adventure of a race as soon as possible.  My legs began to come back to me little by little and I soon caught a few of my fellow runners who had passed me earlier as I laid comatosed in the grass.  I kept on running all the way to finish line and crossed in 9:30, elated to be done with the hardest race/run I had ever done in my life.  Considering I partially dreamed up this course, I truly got a taste of my own medicine.

Spring Has Arrived to the Upper Reaches of WNC!

Over the past few weeks, I've been able to get out on some excellent adventures.  I revisited the Little Hump Fitness Challenge with some friends and extended it to the first ever Hump-D-Hump Challenge.  Although speed wasn't the goal that day.  Hannah, Tom, Michael and I had an excellent jaunt up to the summit of Table Rock starting at the base of Steeles Creek Trail, which offered up high humidity, warm temps, and the feeling that summer was upon us.  Then this weekend, I explored new trails up and down to the Black Mountain Crest, where I was greeted with a dusting of snow and purple trillium's side by side.  Man, this Spring has been a bit whacky, but my vote is for the cooler temperatures to last a little while longer (like the rest of the year).  Enjoy the photos taken from these runs below.

Hump-D-Hump Run w/ Phyllis, Jose, Jody, and Tom.  Route: OVT, AT, side trail to Big Yellow, AT to Hump, back the way we came.

Table Rock Run w/ Hannah, Tom, and Michael.  Route:  Out and back on the MST from the bottom of Steeles Creek.

Well, this year's Spring Break from work at school was most excellent!  I felt that I really capitalized on the time afforded to us to wind down from a hard 2nd semester of teaching.  I won't really go into much detail about each of my adventures, but will let pictures give you a glimpse of what I got into.

I started off with an phenomenal retreat to the Black Mountains to hang in a cabin with a great friend and my new brothers, then leave the comfy confines of the rustic cabin to run up to the crest of the highest mountain range east of the Mississippi and traverse it all the way to Mt. Mitchell and back down.  A few other looney WNC Trail Runners joined us on what I dubbed the Green Woody Crest Traverse, although no one took up the option to climb up to Green Knob at the end of the run.  Let's just say the weather didn't really cooperate, but we still had a great time!

After returning home to visit the families over Easter, Hannah and I headed out for some camping on Table Rock in the Linville Gorge on Monday and Tuesday.  We set up on the summit of Little Tablerock and enjoyed the sunset and sunrise from it's bigger brother.  Jody met up with us Tuesday morning for some trail running out over the Chimneys and to Shortoff and back.  It was just another majestic trip to the gorge!

And a little time lapse footage recorded from Table Rock during sunset and sunrise for your viewing pleasure.


Wednesday featured a good run out at Hickory City Park with the Catawba Valley Trail Runner crew and then I formed a plan for a nice loop out on Grandfather Mountain for Thursday.  I woke up early Thursday and drove up to Blowing Rock for the lone adventure.  Spring wildflowers were popping up all over the Tanawha Trail, I was mightily humbled by the difficulty and lunacy of one of the most amazing and scenic trails in east (Grandfather Trail), and even bumped into some Gorge Rats while bounding down the Daniel Boone and Cragway Trails.  It was a glorious outing on a perfect day on Grandfather!

Next up for Hannah and I was a two day trip out to Merlefest!  The lineup this year was outstanding and we witnessed some great musical moments during our attendance.  Some outstanding acts that we saw this year included: Scythian, Red June, The Duhks, Mandolin Orange, Steep Canyon Rangers, Tim O'brian and Derryll Scott, The Waybacks, Todd Snider, Dr. Ralph Stanley and the Clinch Mountain Boys, Ricky Skaggs and Kentucky Thunder, Sam Bush, and Old Crow Medicine Show!  We returned to the site of my previous 50 miler, Leatherwood Mountains Resort, which my legs are still feeling by the way, and camped out beside Elk Creek between the two days we were there.  Great place, even if you aren't running.

To cap off our Spring Break, Hannah and I took a little trip back up to the Linville Gorge, except this time just for a nice run along Jonas Ridge to Hawksbill and back.  Both of these were trails and summits Hannah had yet to be on, so it was nice to take her out to these iconic peaks in the Gorge.  It was definitely a great way to end our Spring Break.  Also bumped into another Gorge Rat, Mike Jones, while on the run.  Mike has done a ton for the Gorge community in the past few years, and it was great to finally meet him.  A stop into Fonta Flora Brewery afterward was a must as well.  Can't wait for the Brutus!

Posted by Brandon Thrower at 8:38 PM No comments: